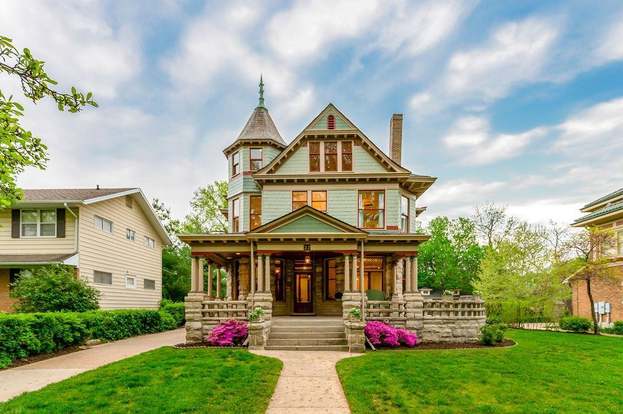 Before Hyde Park became its own neighborhood it was part of Westport in 1833.  John Calvin McCoy built the first General Store and Trading Post the corner of Westport Road and Pennsylvania Street. Westport was located along an Indian trace that ran from Independence to the Indian missions in the Kansas territory. Today, the diagonal Westport Road and Harrison Parkway follow that trace. By 1837 or 1838, McCoy had developed the trading post into the starting point for the Santa Fe bound. By 1848, with the California gold rush, the trickle of hunters, trappers, and emigrants became a torrent of fortune hunters eager to strike it rich. Estimates are that over 100,000 people went to California using the route of the Santa Fe Trail. Most of them stopped in Westport. 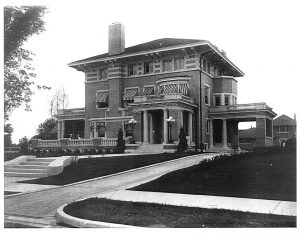 Just east of Westport were natural springs and open grassland. This made it an ideal place for wagons to stop, refresh their livestock, and buy any last minute necessities before the long trek to California. You can still see where the Santa Fe Trail and the natural springs were located, near Notre Dame de Sion, a K-8 school in the neighborhood, and Harrison Parkway in Hyde Park.

In 1857, Westport was incorporated with the boundaries of Brush Creek and Springfield Street (later 31st Street) on the south and north, the Missouri-Kansas state line and Woodland Avenue on the west and east.

By 1885, Kansas City was growing, and fast. Populations increased by over 35% in the last decade of the nineteenth century and then went up another 54% in the first decade of the twentieth century. Trains were moving people and the goods that they needed west. The new settlers on the Great Plains were shipping their cattle and grains back to the eastern markets. Kansas City became a trading hub for the rich western farmland and cattle ranches. Banks were multiplying, as the agriculture and building industries required money to expand. The Ozark forests provided the wood needed to build houses on the plains and Kansas City was ready to deliver that lumber to its destinations. By 1900, Kansas City was the largest city between St. Louis and San Francisco. 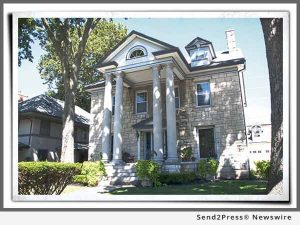 In the mid-1880’s, real estate speculation in Kansas City and Westport reached near-hysterical proportions. Land was sold and resold at fantastic profits. In 1887, real estate transactions in Kansas City totaled 88 million dollars. Real estate transactions would not reach that level again until 1946. In 1893, the proposed Parks and Boulevard system extended south of the Kansas City limits into Westport. Wealthy individuals including William Rockwell Nelson, several Amour families and August Meyer built houses in Westport. In 1897 Westport was annexed by Kansas City. 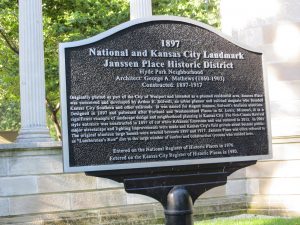 Among the subdivisions platted in 1886, one called Hyde Park was located in Westport. The original Hyde Park subdivision was located west of Gillham Road, outside the present day boundaries of the Hyde Park neighborhood. On the east side of Gillham Road, additional subdivisions were platted in frantic succession from 1886-88 with names such as Nicolett Place, Edna Place, Hampden Place and Regents Park. Kansas City’s first and only private street was laid out at this time when an upscale development called Janssen Place was platted. By 1894, Kansas City had its first golf course, the Kenwood Golf Links in Hyde Park. Until J.C. Nichols built his Country Club residential district in the 1920’s, Hyde Park was the largest planned development of single-family homes in Kansas City. 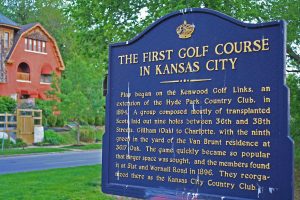 Hyde Park was greatly impacted by the land boom of the 1880’s. Fantastic speculation drove up land prices until the bottom dropped out after 1888 and development effectively halted for the next ten years. Although the first houses were built in the late 1880’s, less than 50 houses were erected by 1900. However, by 1907, when the housing market had recovered, that number of homes had increased fivefold. By the early 1920s, most of the houses in the area were built. 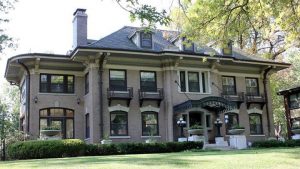 For many years, the entire residential area was generally referred to as “Hyde Park” without reference to any specific subdivisions. Today, Hyde Park refers to the area from 31st Street, south to 47th Street, between Gillham Road and Troost. There are approximately 1,500 homes in the area.

Hyde Park houses first went up when Victorian and Queen Anne styles were the arbiters of good taste. Over the years, Dutch Colonial, Colonial Revival, Neo-Georgian, Craftsmen, Bungalow, Kansas City Shirtwaist, Tudor, and American Foursquare took their place among the Victorians. After World War II, modern styles and suburban ranch homes appeared on the streets of Hyde Park in limited numbers. Nevertheless, even today, a walk down any of the tree-lined streets is a step back in time; when sitting on the front porch visiting with strollers and neighbors, playing croquet, or simply reading a book beside the parlor fireplace passed for entertainment.

A housing shortage developed during and after World War II. All of Kansas City, except those areas with deed restrictions such as the Nichols developments, was rezoned multi-family. Many of the large old homes in Hyde Park were converted into apartments and sleeping rooms.

Starting in the early nineteen seventies, the low prices and unique architecture of these large, old homes began to attract the attention of a new breed of pioneers. These young professionals saw the potential in the beautiful, old houses. They speculated in a declining neighborhood and revitalized it. An estimated one-third of the houses changed hands between 1975 and 1977. 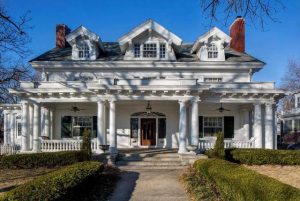 Franny Knight is a 10 year Real Estate Veteran in the Kansas City Missouri Metro and Johnson County, KS. She specializes in the Urban Space of KC , historic homes, neighborhoods, condos and a depth of knowledge of all things in Urban Living and Development. She has a Master’s Degree in Community Psychology from Wichita State University! She played on scholarship both Volleyball and Basketball first at Labette Community College in Parsons, KS and then transferred to WSU to finish out her basketball career. She continues to stay fit and healthy mostly by walking her babies, Dexter, Snoop & Ruby daily on varieties of trails throughout the metro. In addition to being a full-time Realtor, she teaches and coaches Realtors iimprove their marketing with Social Media. Prior to being a Realtor, she was a Public Speaker and Trainer for Creative Marketing & Thinking, Social Media Marketing, Communications, and Negotiation.